This is a true story and was told to me by a friend of Katie’s family.

Katie (her name has been changed for her privacy) was driving to her family’s home in Pennsylvania from her college in New Jersey for a weekend visit.  She was driving on the highway around dusk when she noticed a dark sedan driving behind her. She watched this car for quite some time.  As she sped up, slowed down, and changed lanes, Katie realized that the car was following her closely. Feeling uneasy, Katie picked up her cell phone and dialed her mother’s phone number to ask for advice.  As soon as her mother answered the phone, the line went dead. She tried her mother’s phone several times and each time, the call dropped. She then dialed her father’s phone number and the same thing happened. The dark sedan continued to follow her. Now frightened, and feeling isolated and alone, Katie dialed 911 and immediately the dark sedan slowed and disappeared back into the traffic behind her.

Katie is Introduced to a Phone Jammer

Katie explained her concerns to the 911 dispatcher who told her to continue driving until she was pulled over by a state trooper. After she and the state trooper pulled off on the side of the road, he listened to her story. He explained to her that she had been the victim of a phone jammer.  Like most of us, Katie had never heard of a phone jammer.

The trooper explained that jammers are easy to use devices that can be portable. He explained to her that cell phone users do not even know that their phones are being jammed. The phone will indicate that there is no service or no signal, or calls will be dropped.  The jammer interrupts the phone’s ability to establish a link with the nearest cell phone tower.

The trooper explained to Katie that in many but not all jurisdictions, jammers are unable to block emergency calls such as her call to 911. The trooper told Katie that it is quite possible that this person would have tried to abduct her if she had gotten off the highway for gas or something to eat, and she would have been unable to call  for help. He told her that if this ever happened again, that she should immediately dial 911 and explain that her phone was being jammed.   Devices called blockers or jammers block all cell phones in the immediate area, but jammers often cannot block emergency calls.  The trooper told Katie that the person following her who was using the jammer was able to see on the jammer when she dialed 911 and immediately slowed his car and disappeared into traffic so that he could not be identified.

How Do Jammers Work?

Jammers block phone calls, texts messages, GPS systems and Wi-Fi networks.  The range of a jammer depends upon the power and size of the particular jammer, and upon the surrounding environment and landscape.  For example, hills or buildings or walls could block the signal of the jammer. 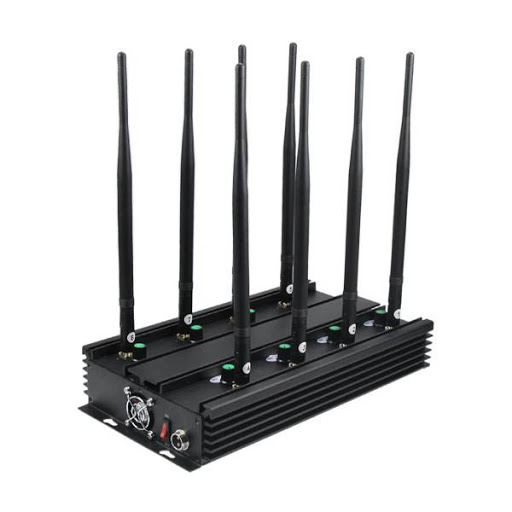 Some jammers, like the one pictured above, are desk-top size, and are more powerful.  A portable jammer can be as small as a cellphone.  Low-powered jammers will block calls only to a range of about 30 feet, which is why Katie was being followed so closely.  And even though Katie was the driver being targeted, every cell phone within thirty feet of the jammer would have been blocked as that dark sedan drove by.

Jammers, or blockers, were originally developed for use by the military and law enforcement to combat threats like cell phone triggered explosives and hostage situations.  They work by sending signals stronger than the nearest tower’s signal on the same radio frequencies as mobile phones, disrupting the transmission between the phone and the tower, and disabling all mobile phones within the range of the jammer.  This prevents the cell phones from sending or receiving signals.

Jammers and the Law

Blocking cell phone service is against the law in the United States, United Kingdom, Australia, and other countries. In the United States, cellphone jamming is covered under the Communications Act of 1934 which prohibits people from “willfully or maliciously interfering with the radio communications of any station licensed or authorized” to operate. Even the “manufacture, importation, sale or offer for sale including advertising of devices designed to block or jam wireless transmissions is prohibited.” Jamming is considered property theft because a private company purchased the rights to the radio spectrum and jamming that spectrum is akin to stealing the property that the company purchased.  It is also considered a safety hazard because jamming blocks all calls in the area.

Under laws in the United States, fines for a first offense can range as high as $11,000 for each violation, or imprisonment for up to one year, and the device may also be seized by the government.

In most countries it is illegal for private citizens to jam any cellphone transmissions. Some countries, however, are allowing businesses and government organizations to install large jammers in areas where cell phone use is seen as a public nuisance, such as in movie theaters and concert halls. India installed jammers in parliament and in some prisons. Universities in Italy have adapted the technology to prevent cheating because students were taking photos of tests with their camera phones and sending them to classmates.

Fortunately, Katie dialed 911 when she became frightened and that emergency call to 911 was not blocked.  Be like Katie.  Be aware of your surroundings.  If you think that you are in danger, dial 911.  And if you think that your calls are being blocked by a jammer, let the 911 dispatcher know that.  Please pass this information on to your children and your friends. Stay safe.