Human Trafficking in Art: The Most Heartbreaking Acts Exposed and Explained With Images Instead of Words

Art has always been used as a powerful method to express all emotions through images. It can be used to express love and beauty but art can also capture the ugly sides of the world. Human Trafficking is one the worst crimes that infects our society and puts the innocent in danger. Below are various forms of art (paintings, photos, tattoos and graphic novels) that help show the anguish and hardship that victims of human trafficking must face and why our society must act to stop this horror.

ArtWorks for Freedom uses the power of art to raise awareness about modern day slavery and human trafficking.

ArtWorks for Freedom’s Survivors Quilt Project was created and led by Aashika Damodar, head of Survivors Connect, while she was still an undergraduate at UC Berkeley. The Survivors Quilt displayed here represents the voices and experiences of those who were once enslaved -¬ survivors of exploitive migrant labor trafficking, sex trafficking and abusive domestic servitude. With colorful fabric, paint, sequins, threads, markers and scissors, they have tapped into their own creativity with many defiant acts of truth telling. They speak for all those who have gone before them and for all those who are still enslaved. 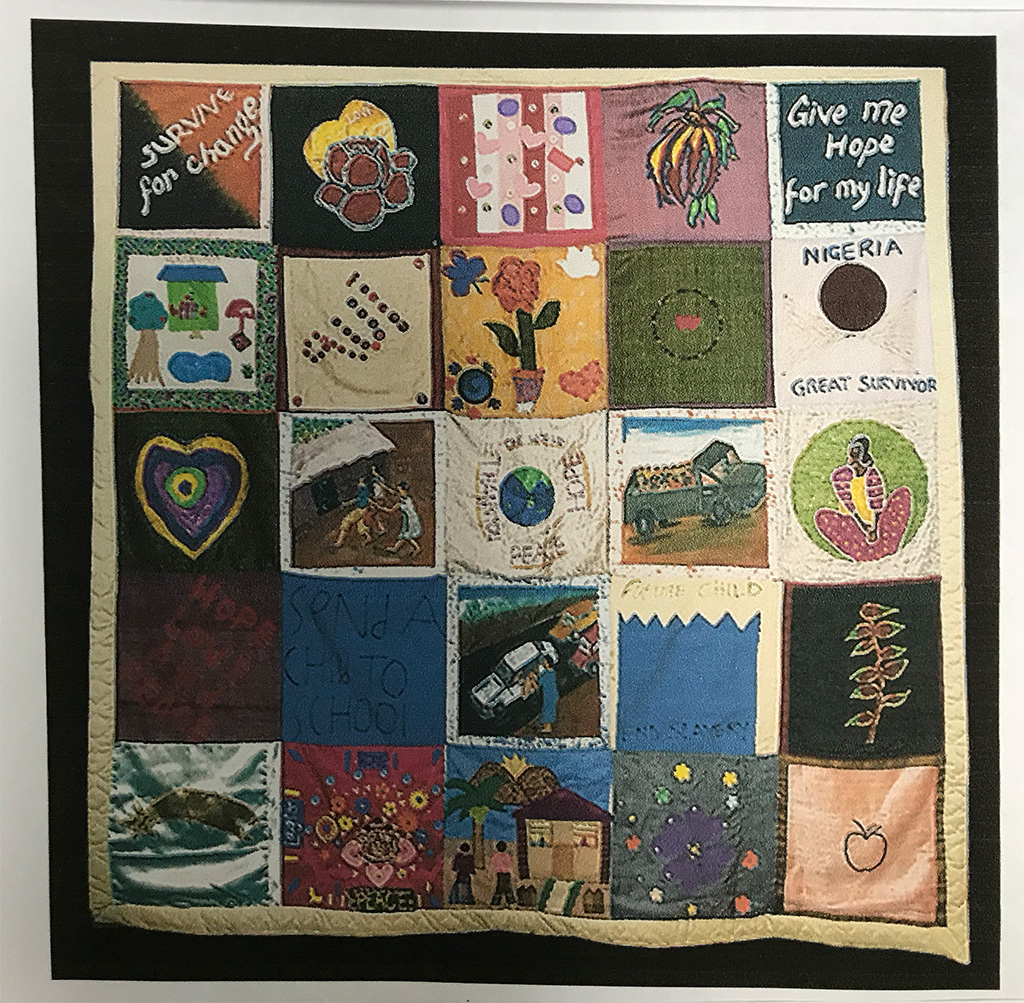 The Golden Doors to Freedom is a participatory arts project that turns abandoned doors into dramatic vehicles for communal focus on human trafficking. Guided by master gilder William Adair, trafficking survivors and allies in the community will convert discarded wooden doors into freedom portals. After applying 23k gold leaf to the doors, participants will write, stencil, draw, scratch, burnish and embellish them with their own expressions about trafficking. 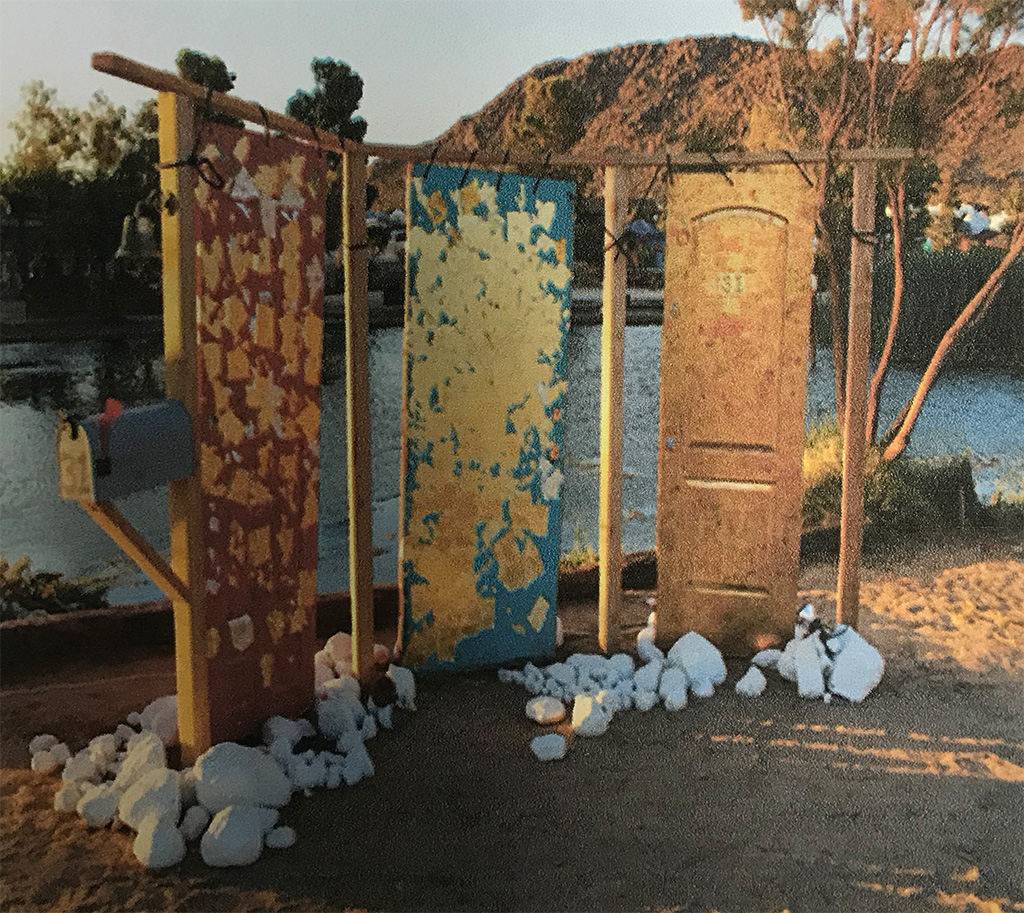 For more from Artworks for Freedom visit: https://www.artworksforfreedom.org/about-us/

Molly Gochman’s Red Sand Project is an ongoing collaborative art installation created to raise awareness of modern day slavery. Participants and invited to fill sidewalk cracks with red sand or other materials, and then share an image of their transformation with the global community using the #RedSandProject.

Hidden in Plain Site features creative referendums developed by a team of concerned artists in order to raise awareness of and help thwart human trafficking.

“Which one is trafficked?” is a piece created by Jerri Allyn and attempts to inform and teach the public how to spot victims of trafficking 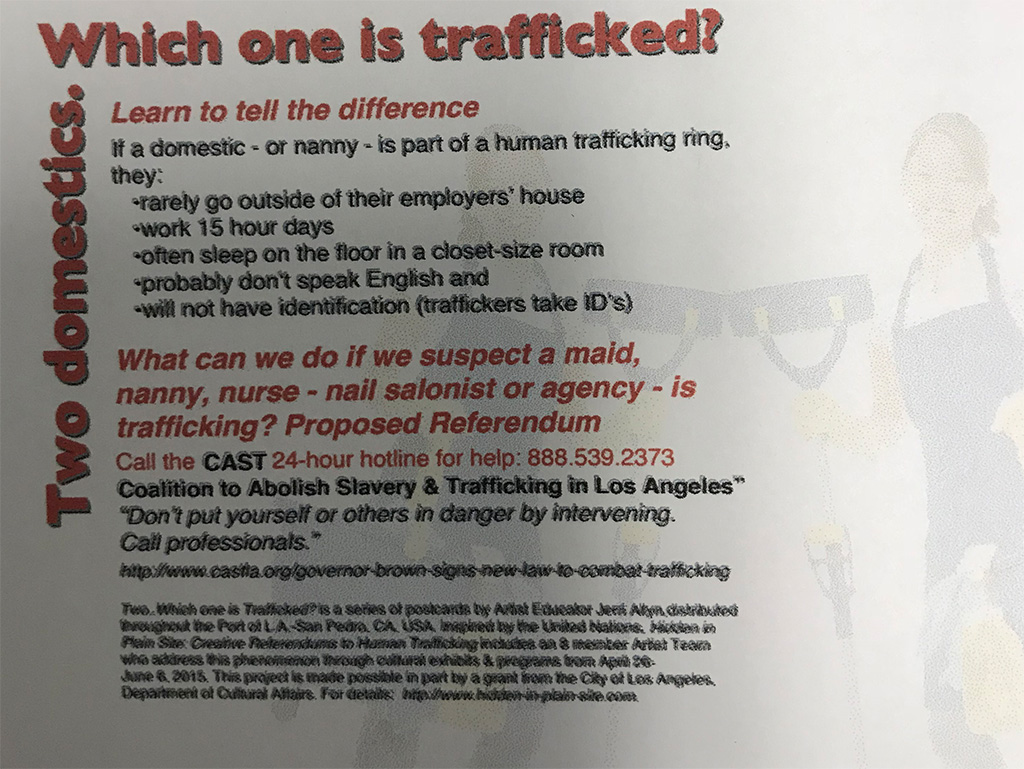 Sarafina Rodriguez’s “The Stowed Away” is an interactive play, including a short animated stop-motion film, created on an iPhone5. Rodriquez invites you to sit and imagine your own rescue scenes with these felt characters, set on flannel board. This “play” is based on true events, which Rodriquez hopes will open eyes to the mind-boggling truth of one of the world’s oldest trades – human trafficking. Through the perspective of a child playing, a dark tale of two naïve teens sold into slavery then taken to a foreign land unfolds. The play is a serious-comic-response, and the artist hopes to instill responsibility as a community, to address trafficking on a local level.

April Williams’ “Consume and Emergence” aims to challenge the character of the “cool pimp.” The character of the pimp in American media has long been viewed as a cool, suave macho man firmly in control of his stable of “grateful” girls who would be lost without him. In reality, sex trafficking in America is brutal and dehumanizing. The glorified American pimp is no better or different than a sex trafficker in Asia, Africa or Europe. The artist has been investigating and challenging the image of the glorified American pimp through a series of small and large-scale oil paintings on un-stretched canvas.

For more info and works from Hidden in Plain Site visit: http://hidden-in-plain-site.com

Survivor’s Ink is a nonprofit that uses a different kind of art to help trafficking victims cope. Traffickers use tattoos to mark survivors, to show “ownership.” Survivor’s Ink exists to raise awareness and to empower human trafficking victims by breaking the psychological chains of enslavement through beautifying, removing, or covering their physical scars, markings and brandings that are constant reminders of a violent past. Below are before and after photos of the tattoos of survivors. 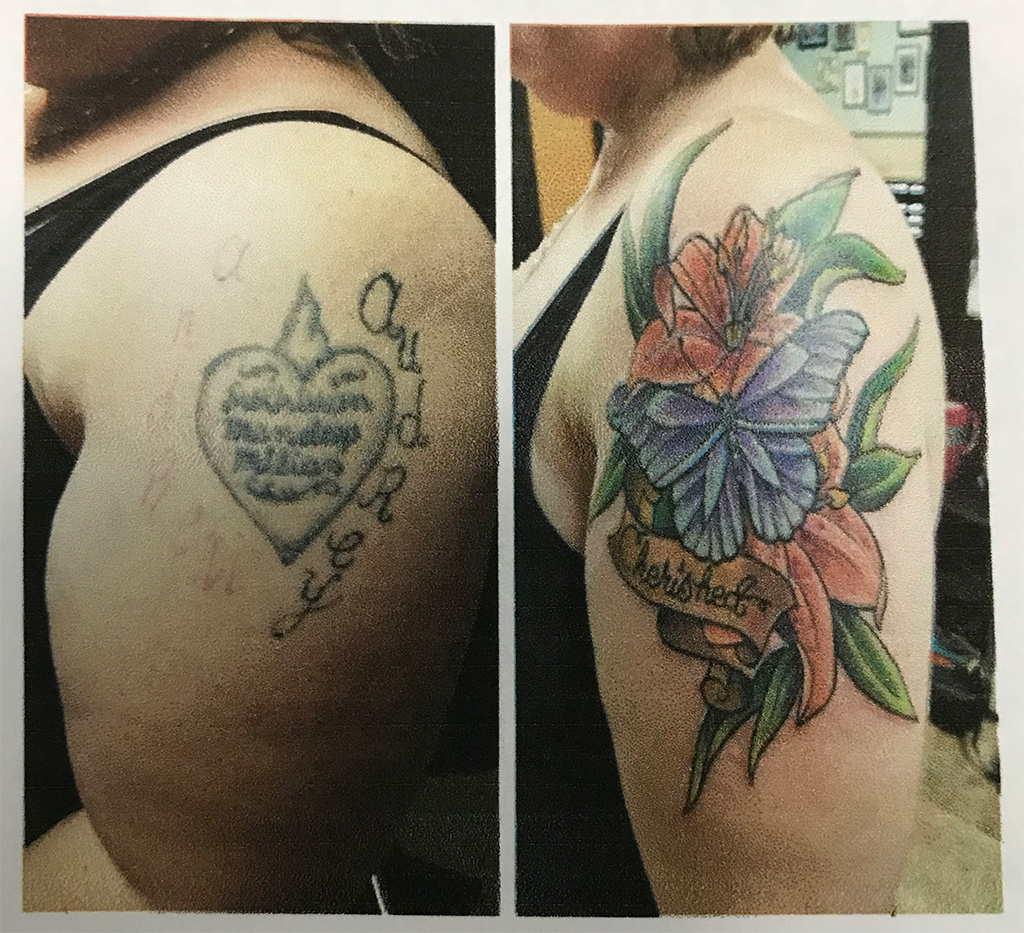 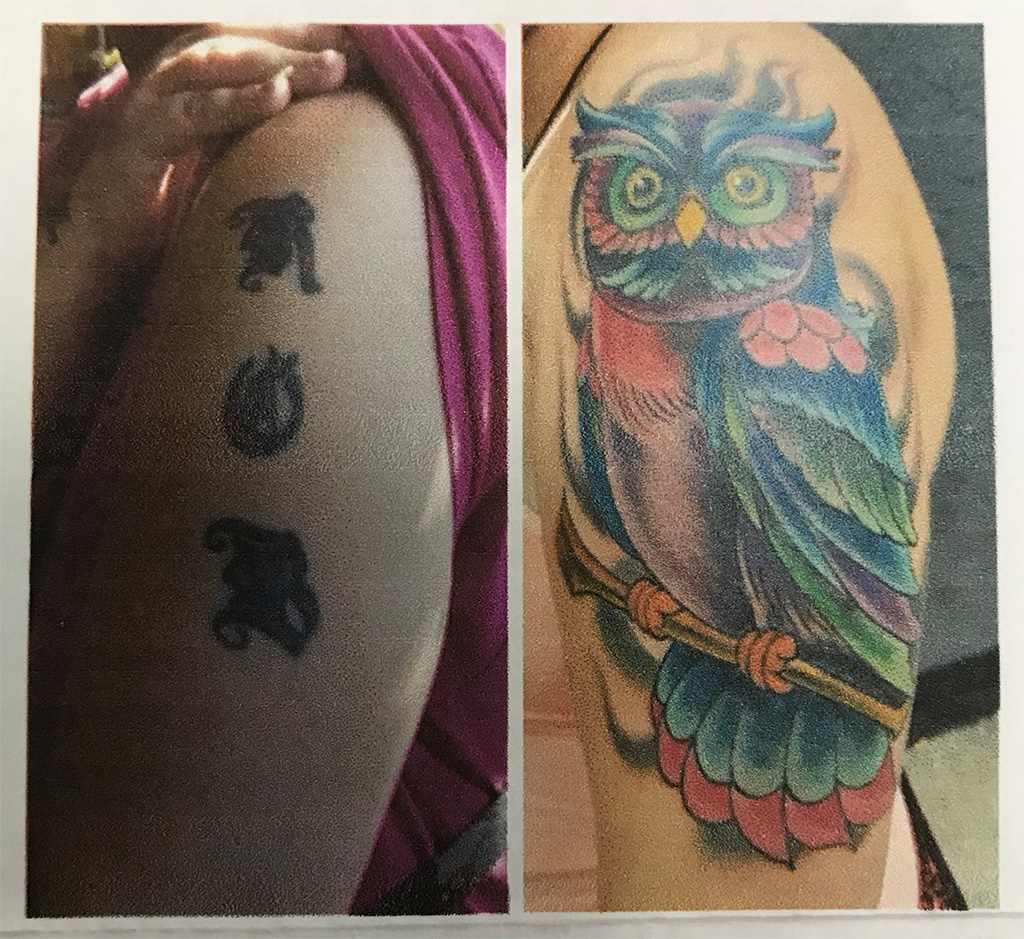 Photos by Almudena Toral for The Guardian

For more on Survivor’s Ink mission and successes visit: http://www.survivorsink.org

Wolves in the Street

A new comic launched on Snapchat and Instagram is meant to teach teens about human traffickers contacting them over social media. The first two 10-panel stories, in a series called “Wolves in the Street,” tells the story of a teenage girl who dreams of becoming a singer when she is contacted by a man on social media who promises to make her a superstar.

Dan Goldman, the artist behind the comic strip, teamed up with anti-trafficking NGO Unitas to create the story, ensuring that it is based on real-life experiences of trafficking victims. 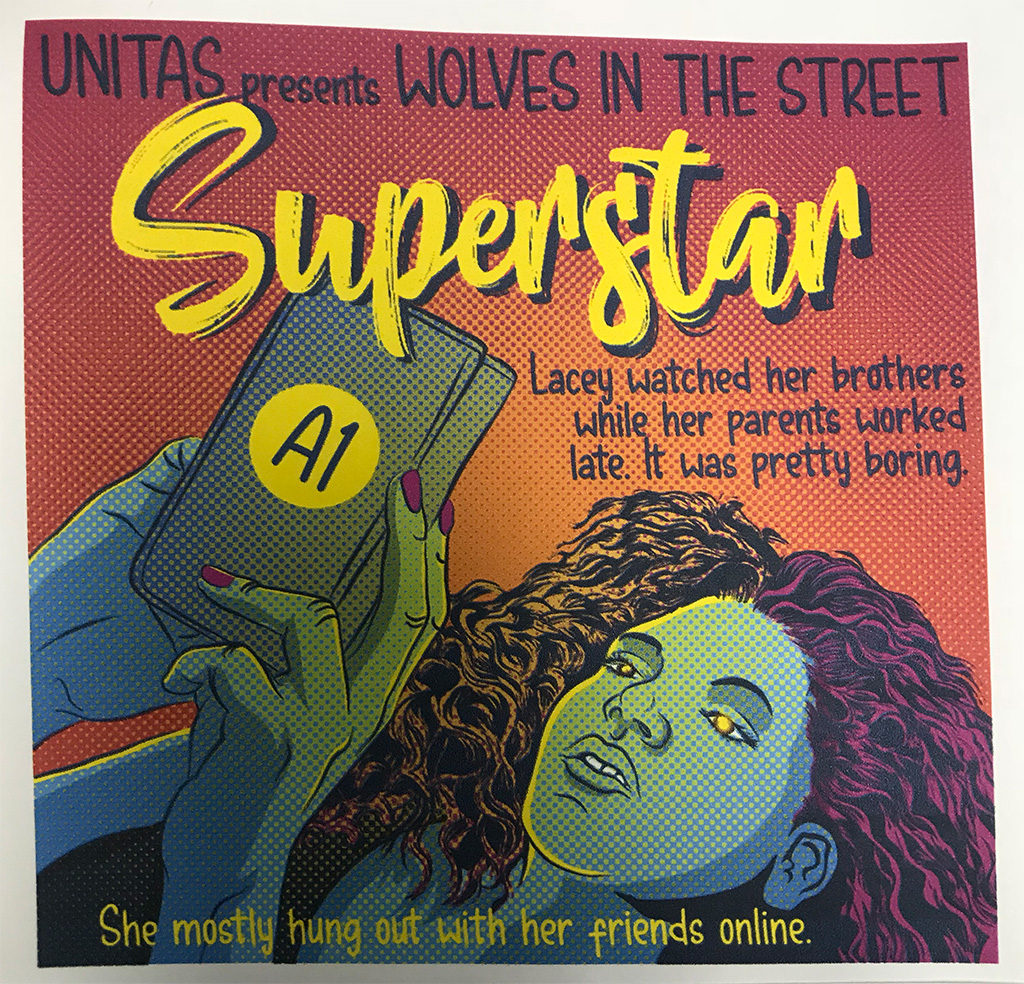 “The idea behind doing the comics this way is that we were going to go where people were looking – jump in front of their eyes,” said Goldman

For more info about Unitas’ mission and efforts visit: http://www.unitas.ngo