Epstein was reported to be a billionaire who had worked as a financier. Two days before his death however, he had signed a will which indicated that he was worth less than $600,000,000.  He had a high-profile social circle and associated with Bill and Hillary Clinton, Prince Andrew, Hollywood stars, and Ghislaine Maxwell.

He was a convicted sex offender who in 2006 had served 13 months in a Palm Beach County jail, with work release which allowed him to work at his office six days per week.  He registered as a sex offender.

At the time of his 2019 arrest, police indicated that he “exploited and abused dozens of minor girls at his homes in Manhattan, New York, and Palm Beach, Florida, among other locations.”  Some of the girls were as young as 14 years old.  The indictment also indicated that “in order to maintain and increase his supply of victims, Epstein also paid certain of his victims to recruit additional girls to be similarly abused.” 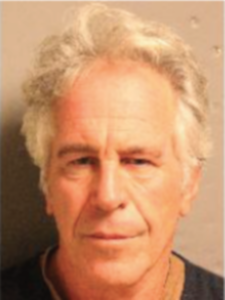 He was arrested in July 2019 and was denied bail.  On July 8, 2019, federal prosecutors charged him with one count of sex trafficking of a minor and one count of conspiracy to commit sex trafficking.  Epstein pleaded not guilty on both charges. On July 24, he was reportedly found injured in his cell.  Early in the morning on August 10, he was found unresponsive in his cell.  Prison guards performed CPR and he was transported in cardiac arrest by EMS to the New York Downtown Hospital where he was pronounced dead.  His death was officially ruled a suicide by hanging, by the New York City Chief Medical Examiner, Dr. Barbara Sampson.   His death was being investigated by the FBI and Department of Justice.

The declaration of Epstein’s attorneys that he had not been despondent as he was awaiting a bail hearing, his brother Mark’s belief that Epstein did not suicide, and several irregularities at the jail has led to the belief that perhaps he did not commit suicide. He had been reported to be on a suicide watch and so would have had a cellmate, but his cellmate had been removed from his cell before his death.  Cameras outside his cell malfunctioned the night of his death.  Guards were supposed to check on him every 30 minutes but two prison guards stated that they had both fallen asleep and so they were not aware of what might have happened in his cell. They have also been accused of falsifying records.  The theory has been presented that wealthy and powerful associates of Epstein had arranged his death to keep secret their involvement in sexual trafficking and abuse of minors.  Some are calling this a conspiracy theory.

Due to his death, the charges against him have been dropped.  His victims are left without the satisfaction of a conviction, but several are suing his estate.